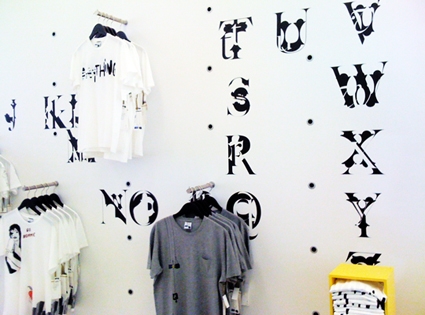 The Colette x Gap Pop-Up Store is ending its month long run on NY’s 5th avenue. The store contained exclusive Colette x Gap merchandise by artists / labels like Jack Spade, Neckface, Claw Money, Repetto, Converse and more. We managed to smuggle out a few shots before we were stopped by a store employee. More pics after the jump.

We had to argue with some of the execution. What is up with the IKEA-esque wall clings? Why are shirts by “street” designers mass printed on normally blah Gap merchandise instead of nice clean silkscreens on better T’s? Overall the line was a success (albeit an over-priced one) including a couple must-haves including the Jack Spade moustache gloves ($90) and a limited edition pair of Colette x Gap Converse R(ed) High Tops ($100).