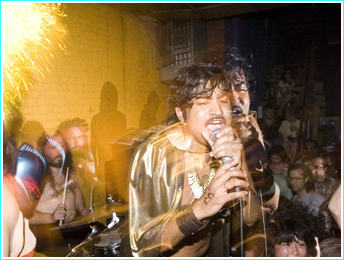 King Kahn and The Shrines at Don Pedro’s
Photo Gallery Via: Myopenbar.com

CRYPT RECORDS 25th ANNIVERSARY: Crypt celebrates not only their 25th year in the record business (releasing Back From The Grave, Las Vegas Grind, The Socker, and other legendary comps plus bands like the Gories, Headcoats, Oblivians, and Jon Spencer Blues Explosion) but also the grand reopening of their remodeled Williamsburg store with KING KHAN & The BBQ SHOW’s first and only performance in the tri-state area in months, supported by Jack Hines’ of Black Lips new band, THE K-HOLES. Crypt head honcho TIM WARREN and New York Night Train soul proprietor JONATHAN TOUBIN lay down the wild and the wooly all night long with ANNA COPACABANA’s go go dancing and SPENCER BEWLEY’s projections.

If you missed Kahn’s EPIC secret show with The Shrines at Don Pedro’s a few weeks ago, you can relive the magic here, courtesy of Myopenbar.com. RSVP for tonite’s show by emailing here and get in for a five spot.