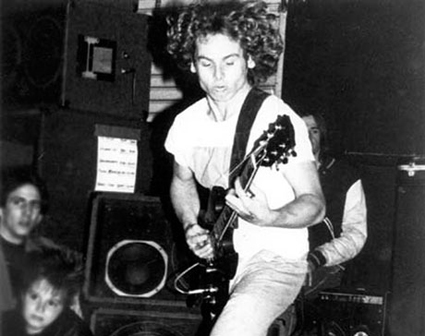 Frank Navetta passed away on Oct 31. Along with Tony Lombardo and Bill Stevenson, Navetta founded the Descendents in 1979. Soon thereafter the boys roped in smarty pants Milo Aukerman to sing and of course the rest is history. The Descendents were in some ways the imagined ideal of southern California punk.

Sounding always like a bunch of dudes who had just breezed in from the beach who could casually rip through a rapid fire set of deceptively scathing songs. Drawn along by Frank’s guitar and Milo’s teenaged pathos, it was So-Cal brightness shaded with suburban angst. They were amazing kids. Theirs was a subtler “if the kids are united” call to arms.

Milo Goes to College might be the LP I’d take if stranded on a desert island. Just lively and snide enough to get me through the endless days and nights waiting for Bo Derek to wade up out of the water. Milo actually going to college kind of screwed the band. He returned for I Don’t Wanna Grow Up but Frank was soon gone to tackle fishing full time. A fisherman’s life is fucking hard and he at least didn’t have to grow up.

In 1982, when I first heard Bikeage, I thought wow wow wow. All these years later hearing of Frank’s passing, I’m stuck with the same goddamn song and “I can’t think about it cuz it makes me sick.”